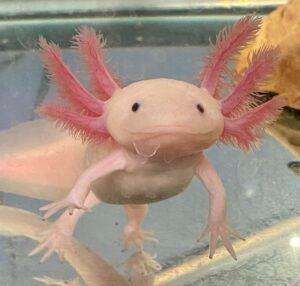 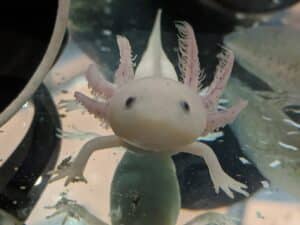 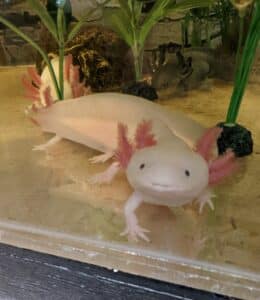 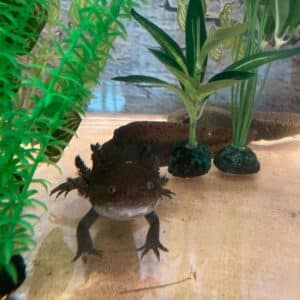 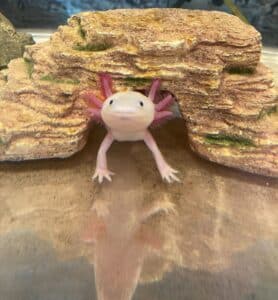 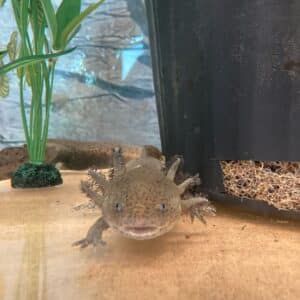 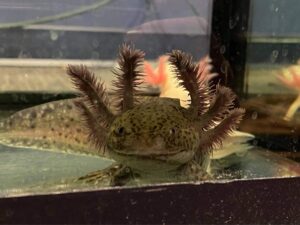 We have 16 axolotl Animal Ambassadors that came to us during the COVID-19 pandemic. We know our visitors are going to enjoy seeing their smiling faces just as much as we do.
The axolotl, also known as the “walking fish” or “waterdog”, is a paedomorphic species of salamander native to a small part of Mexico City. The word “axolotl” is thought to roughly translate to “water monster” in the ancient Aztec language Nahuatl.
The species begins as an egg and, like all salamanders, hatches into a small larva resembling a tadpole or fish with a set of external gills along each side of the head. They quickly begin to grow limbs, starting with the front legs at about 30 days, with hind legs emerging by about 45 days. This is when most salamander species would begin the process of metamorphosis, ultimately absorbing their external gills and developing into a creature capable of leading a primarily terrestrial lifestyle.
The axolotl, however, is one of few species that reach this seemingly “in-between” phase and then just stop. This is called neoteny.
This species differs greatly from most salamanders in that it has evolved to make this last step of transformation obsolete, and instead, it reproduces in its larval form. This allows axolotls to live their entire life cycles underwater, helping them succeed in their native environment. Unfortunately, axolotls today are critically endangered in the wild due to habitat loss and the impact of invasive fish species that inhabit their natural range.
Newly hatched axolotls, hungry for their first meal, will sometimes snack on their siblings’ limbs. They grow back, after all.
*NOTE: Axolotls are a protected species that is illegal to keep, breed, or sell without a permit in BC and other provinces.*
ADOPT AN AXOLOTL