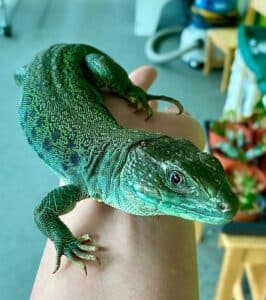 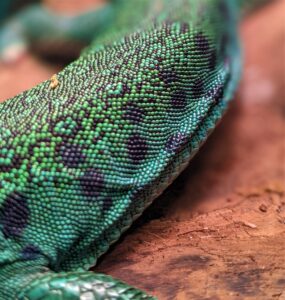 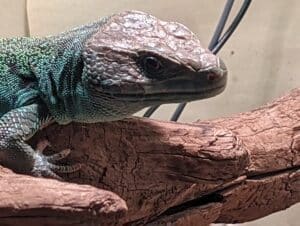 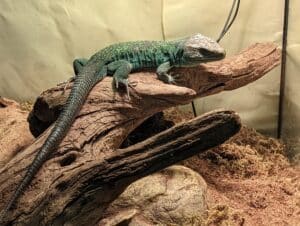 Cypress the jeweled lacerta, also known as an ocellated lizard, has been at the museum since 2021. He is a beautiful, showy lizard with shiny jewel-like scales, but the species is actually extremely shy by nature. We are working toward building comfort and confidence around humans through daily practices, leading Cypress to associate his handlers with positive experiences, such as feeding favoured treats by hand.
These mid-sized lizards are endemic to southwestern Europe. They usually reside in bushy woodlands and dry, rocky areas. Unfortunately, this species is threatened in the wild. While factors like climate change, human interference, and habitat loss have contributed to a decline in population, less obvious factors have had a more measurable impact. Predation of offspring by non-native species of pheasant, introduced for hunting, as well as the widespread use of medicines intended to eliminate parasites in livestock, have also had a negative impact. In addition, wild jeweled lacertas depend on rabbit burrows and tunnels for shelter from predators and the elements. It is possible that disease outbreaks brought on by human pest control practices that at one time decimated wild rabbit populations also contributed to the jeweled lacerta’s population decline. Conservation efforts have included protection laws and programs intended to help increase survival rates by providing these lizards with alternative, artificial shelter mechanisms throughout their natural range.
ADOPT CYPRESS