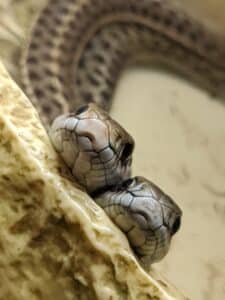 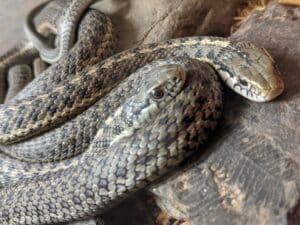 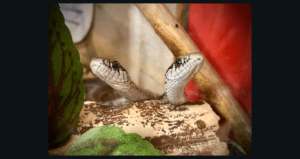 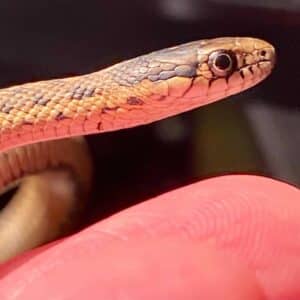 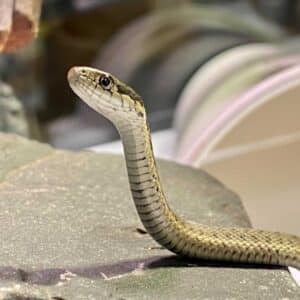 We have quite a few garter snake Animal Ambassadors here at the museum. They are often public favourites as they are very active and always seem to be up to something.
Garter snakes are one of the most common species of snake throughout the North American continent and have a wider geographic range than any other snake. A large variety of subspecies can be found from coast to coast, as far south as Mexico and all of the way up to Alaska. These snakes reach an average of two to four feet in length and can exhibit many different interesting patterns and colours. They are completely harmless to larger mammals and have an instinctual tendency to avoid close contact with humans. They do produce a neurotoxic venom which is delivered through their saliva as a means of subduing small prey, such as earthworms, fish, frogs and tadpoles, some of their favourite snacks. When approached by a potential threat, their first reaction is to quickly slither away to safety. If they are picked up by a human or grabbed by a would-be predator, they will typically thrash their bodies around and spray a foul-smelling musk in an attempt to escape. While they sometimes bite as a defence mechanism, it is usually a last resort and does not result in any significant injury.
Residing most often in grassy or sparsely wooded areas near natural water sources such as creeks and ponds, these snakes are one of the hallmark signs of a healthy ecosystem. As social creatures who spend their winters sheltering from the cold together by the hundreds or even thousands, these snakes require a well-balanced ecosystem to support a stable population. Like all snakes, they are opportunistic carnivores who swallow prey items whole. They eat more frequently than many other species due to their high metabolism and feed primarily on earthworms, frogs, and rodents. However, their diet varies due to location as well as season and will also often feature a variety of other small creatures including snails, slugs, tadpoles, fish, lizards, and occasionally other snakes.
ADOPT A GARTER SNAKE