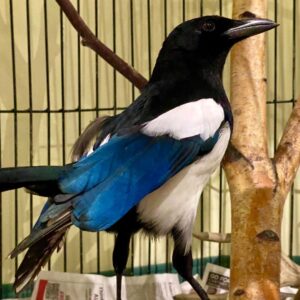 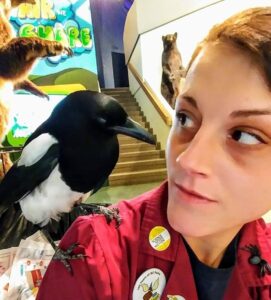 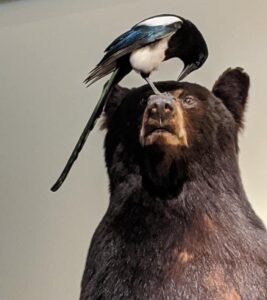 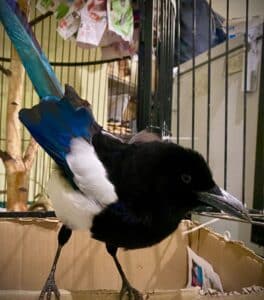 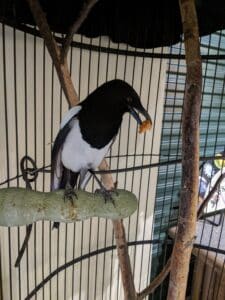 Anyone who’s been to the museum in person since 2015 will likely recognize this cheeky bird. Loki has formed unique relationships with many guests and staff alike over the years and definitely isn’t shy about picking favourites. The stimulation of observing and interacting with guests of all ages is something that he certainly enjoys.

Did you know that magpies, a member of the corvid family, are some of the most intelligent birds on the planet? In fact, corvids are some of the most intelligent animals known to exist, with a brain-to-body mass outmatched only by humans, great apes, and aquatic mammals such as dolphins. Magpies have shown the ability to imitate human speech in numerous languages and voices, are capable of tool use, and possess problem-solving ability on par with that of a small human child.

Loki was rescued from a dog attack as a hatchling when he and his siblings fell from their nest. Unfortunately, he was the lone survivor of his brood. Because he is very imprinted on humans, thus not eligible for release into the wild, Loki was brought to live in the museum and was integrated into the Biome as an Animal Ambassador. He has been one of our most interactive and popular Ambassadors ever since. Loki is very intelligent, able to mimic human speech, and performs many different little tricks and games.