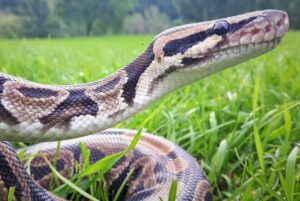 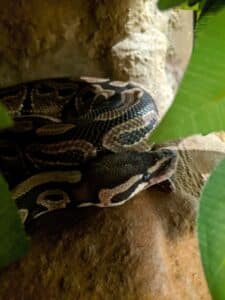 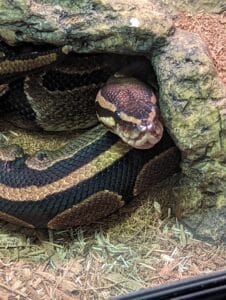 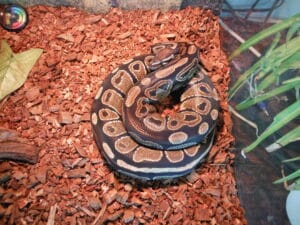 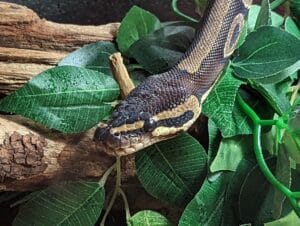 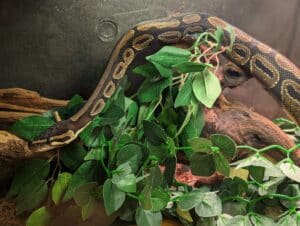 Rio joined us in 2014 and quickly captured the hearts of our visitors. Ball pythons are shy by nature, but with some time and effort, they learn to trust their caregivers. Rio is used to being handled and admired and is very comfortable being the centre of attention.
In the wild, you can find ball pythons throughout the grasslands and open forests of West and Central Africa. As the most popular snake species kept as a pet worldwide, most people have had the pleasure of seeing one of these beautiful animals at some point in their lives. Unfortunately, due to their extreme popularity as pets, one of the greatest threats to this species in terms of conservation is the over-collection of wild populations for distribution in the pet trade. While captive breeding has seen an increase in recent years, most of those sold in the pet trade are still wild-caught, simply because the cost is much lower than that of breeding and raising captive specimens. For this reason, tens of thousands of these animals are collected from the wild and exported from Africa for the pet trade every year.
The ball python is one of the smallest species in their genus, reaching maximum lengths of 3-5 feet, with females being larger than their male counterparts. In the wild, these snakes are estimated to live roughly ten years, while in captivity, a lifespan of about 20-30 years is typical. There have been many documented cases of captive individuals living 40-60 years, including one 62-year-old female who mysteriously produced a fertile clutch of eggs despite being housed alone at the Saint Louis Zoo for more than 20 years.
ADOPT RIO