< BACK TO ALL PAST EXHIBITS

The Pacific Great Eastern Railway, and its successor BCRail, have always been a source of comedy and controversy for British Columbians. Unfortunately, much of it is deserved.

From its beginnings the PGE had the worst luck possible and continued that tradition for its entire history. British Columbians know a great source of comedy when they see it and the PGE is a great source.

In spite of all, the Railway did make its valuable contribution to the Province and is still a project which British Columbians can be proud.

This exhibit is in three parts: PGE Arrival details the 1952 arrival of the railway to Prince George; L. C. Gunn, Surveyor examines the surveyor’s work on the PGE; and Cartooning Rail is a collection of cartoons that lampoons the railway from North Vancouver’s perspective.

In addition to the presentation here, the exhibit features artifacts, documents and photos from The Exploration Place Museum and Science Centre and cartoons from the North Vancouver Museum & Archives. 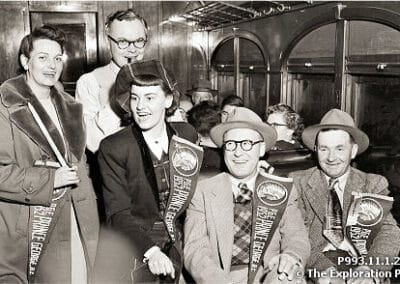 Travellers on board the first PGE train to Prince George in 1952. Wally West photo. 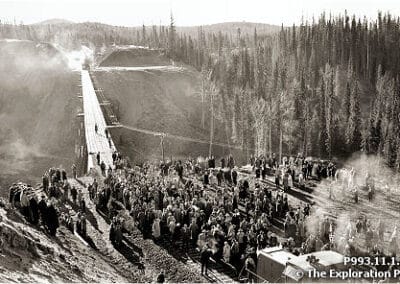 A Crowd gathers at the newly completed Cottonwood River crossing north of Quesnel to greet the first PGE train in 1952. Wally West photo. 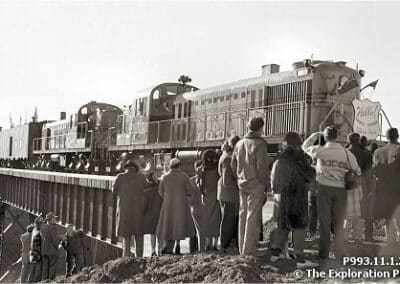 The first PGE train makes it way across the Cottonwood River north of Quesnel on its way to Prince George in 1952. Wally West photo. 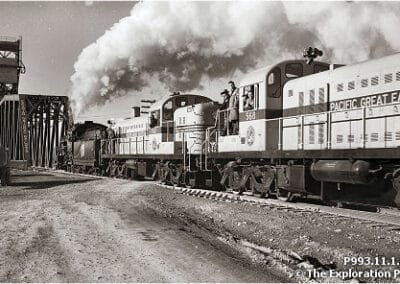 The First PGE train is guided by a CN Rail engine across the Grand Trunk Pacific bridge in Prince George in 1952. Wally West photo. 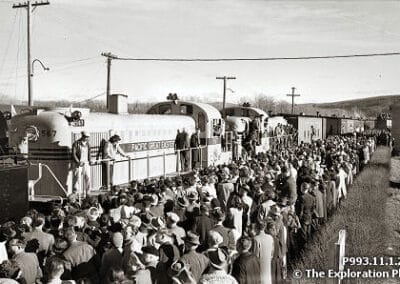 A crowd greets the first PGE train in Prince George at the CN Station on First Avenue. The PGE hadn’t yet finished its own station. Wally West photo. 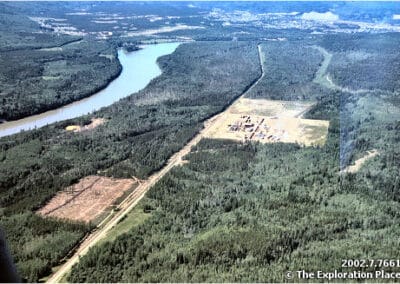 Aerial Photo of the BCR Industrial site south of Prince George taken during the 1950s. You can see that there is very little development here. This site now has a rail yard and numerous other industrial sites. Wally West photo. 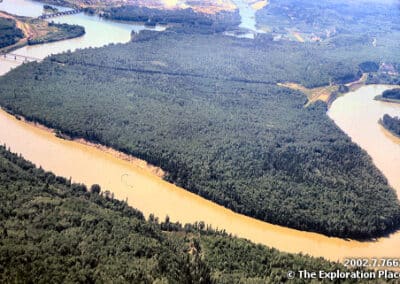 Aerial photo from the 1950s of the eastern edge of Prince George where two Pulp Mills would be built in the late 1960s. The Rail Line will service the mills and continue to northern British Columbia. Wally West photo. 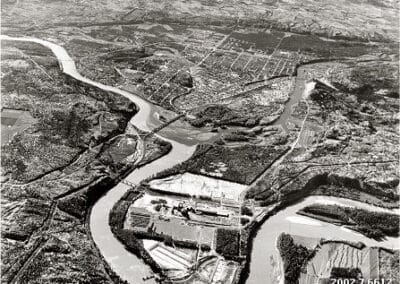 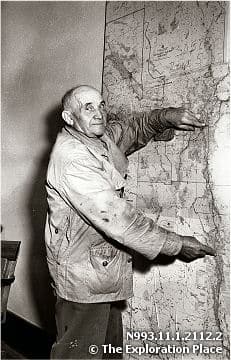 L. C. Gunn pointing to a map where the P.G.E. Rail Line was constructed between Quesnel and Prince George. Wally West photo.

In 1952, the Pacific Great Eastern Railway finally made its way into Prince George. The PGE was often the topic of ridicule and parady but its arrival in Prince George was cause for celebration. The PGE would be a catalyst for developement and economic growth in Prince George and throughout North Central British Columbia.

The railway started its planning and construction in 1912. By 1918 the railway had made its way to Quesnel. 2 World Wars and The Great Depression conspired to halt construction. The PGE was sometimes known by other names such as the “Prince George Eventually” railway as only 40 miles of rail separated the railway from Prince George. After World War II, and almost 40 years after the start of construction, the project resumed and the PGE arrived in Prince George.

Prince George boomed in the years following the PGE arrival and began a new round of development in the City.

Luther Collins Gunn was working for the Grand Trunk Pacific Railway when he was hired to survey the route for the newly formed Pacific Great Eastern Railway. L. C. was in charge of surveying from Lillooet to Fort George and on to the Salmon River. Construction was halted in 1918 at the Cottonwood River when no stable crossing was available. Steel, work crews and money were in short supply at the end of World War I, and the Provincial Government took over operations.

Cartooning Rail features selections from the works of Vancouver Sun cartoonist Len Norris, who poked fun at the eccentricities of life on the West Coast and delighted in the adventures of the P.G.E. Railway.

Mr. Norris was widely respected as one of Canada’s foremost political cartoonists and was the recipient of many National Newspaper Awards. He was elected to the Royal Canadian Academy of Art and was a member of the Toronto News Hall of Fame and an officer of the Order of the British Empire. Many Len Norris cartoons are held in public collections such as the National Archives of Canada and the West Vancouver Museum and Archives.

The Cartoons displayed here were provided by the West Vancouver Museum and Archives, while others were selected from the Norris Annual Collections published by the Vancouver Sun. Comments concerning the progress of the railway were collected from Remembering B.C. Rail; British Columbia’s Own Railway, Lorraine Harris; and P.G.E.: Railway to the North, Bruce Ramsey.