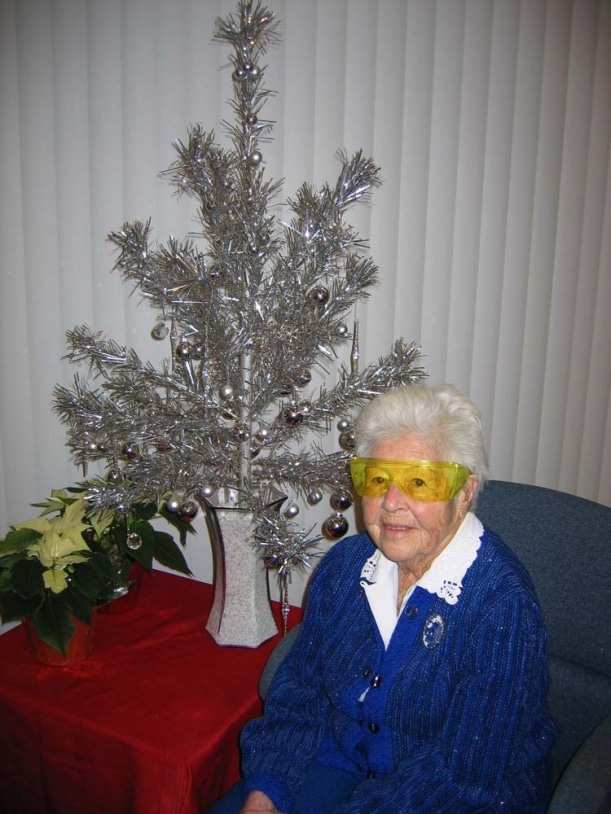 ‘Bea’s tree’ was purchased by Bea Dezell in the 1950’s and was used to celebrate Christmas with the Brownie packs in Prince George.  After the Brownies, the tree was used by the PG Weavers and Spinners at Studio 2880 for several years and then was sold in a garage sale and bought by Shirley Gratton.  The tree re-surfaced at her garage sale and the Festival of Trees committee, led by Shirli-Gene Sadowick, decided that this little aluminum tree had a history that required preserving.  Christened ‘Bea’s Tree’ it was decided that each year at the Festival of Tree’s Gala Auction evening, the little tree would be sold to the highest bidder.

Bea passed away March 6, 2014 at the age of 105.  Predeceased in 1972 by her husband Garvin Dezell (Mayor of Prince George 1950-1953 and 1960-1969) who owned much of his business and political success to her support and intelligence. She lived her life helping others. She was a Girl Guide Leader, a member of the Royal Purple and, in her later years, a strong supporter of the White Cane Club and the Canadian National Institute of the Blind. Since 2004 Bea’s tree has raised $111,650.