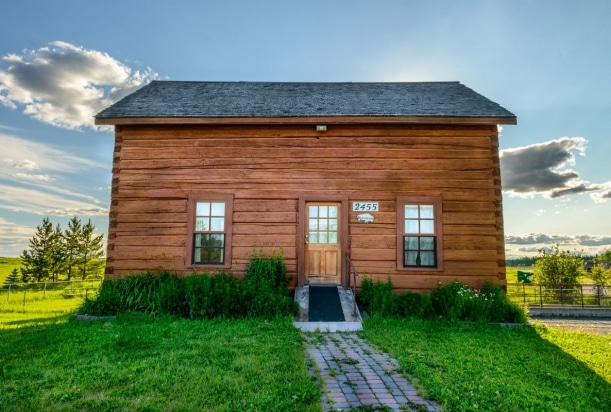 The Blackburns moved into the Prince George area in the fall of 1919. They located a homestead six and one half miles southeast of the town in the Pineview district and by April of 1920 the house, a two-story log building, was ready to move into. R.J. Blackburn and his sons stayed out at the homestead, living in a tent and building the house, while the mother and smaller children stayed in Central Fort George. The road was very steep and narrow going up what is now known as Airport Hill and so hard to go up with teams and wagons that it took six and a half hours to move out to the new homestead.

The Blackburns raised Holstein cows and had the first dairy in Pineview, supplying milk to the town’s residences and businesses. They won many ribbons, trophies and plaques at the annual Fall Fair. Robert or R.J. also played the violin at dances around the area. In January of 1927 tragedy struck the family when Robert James Blackburn was gored to death by the farm bull, leaving the mother and the rest of the family to manage the farm.

The 1920 Blackburn house is considered to have heritage value and in 1999, after being partially restored, it was moved from the farm, about a mile up the road, near the Blackburn Community Centre. Restoration was completed and the House opened to the public in 2002. It now houses pre-school and Out-of-School programs and the voices of little children are once again heard in the old Blackburn house. Antiques and artifacts donated by the descendants of the Blackburn’s as well as many donations from Blackburn Community members adorn the shelves and cupboards of the old house. The house is open to the public on Saturdays from 9 am to 12 pm.