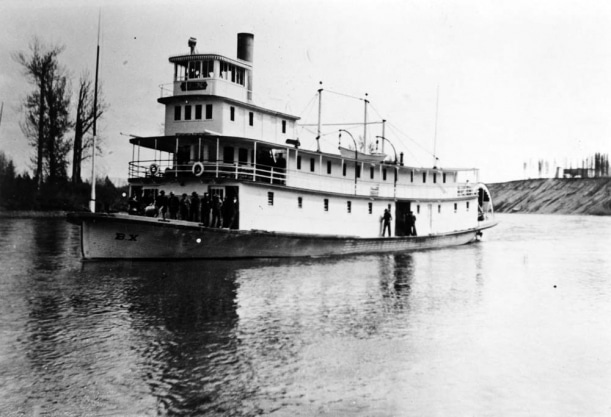 Being the most popular of the sternwheelers, the BX had to deal with unfounded rumours and superstition. This was partly due to the fact that the British Columbia Express Company launched the BX on Friday the thirteenth in May of 1910. The shipyard workers were wary of the BX’s luck and so to pacify them the British Columbia Express Company explained that Friday the thirteenth was the company’s lucky day.

Members of a rival sternwheeler, the Chilcotin, spread a rumour that the BX was so wide that she would not be able to pass through the narrow low-water channel in the Fort George Canyon. They dubbed the BX the “White Elephant” which stuck until after she had an opportunity to demonstrate that she was not worthy of this name.

She eventually won over the doubters and was known from then on as “The Queen of the North,” owing to her great speed, comfortable accommodation and the reliability of her scheduled service. She was also faster than the larger sternwheelers, the Operator and the Conveyor; and more superior in performance than the luxurious Chilcotin. With a cargo of 2,500 bags of cement, the BX sank when she struck a rock below Fort George Canyon in November of 1919. With the arrival of the railway, the boats soon faded from the scene and many of their hulls were left to rot, beached on the banks of the Fraser.